Selextorhood is a monthly female only DJ workshop founded by Birmingham based DJ and forward-thinker Holly Hollister.

Holly Hollister with a selextor

Since being allowed out the house without chaperones and iron clad chastity belts, female DJs are spreading their metaphorical wings-bringing with them an overwhelming breadth of rising talent, not to mention opening doors to genres unknown, and females are unequivocally dominating the spotlight right now. Midlands born Hip- Hop DJ Tiffany Calver is currently making her way into the record books as the first female to present The Rap Show on Radio 1. How did she celebrate it? Opening for Drake on his Arena Tour, of course!

Selextorhood’s USP is providing a safe space for females only to practice or learn new skills, regardless of ability. Whether you’re a bedroom DJ just dipping your toe into the pool of mixing, or on tour with Drake, all female-identifying people are welcome.

Each Selextorhood consists of two practice sessions and an in depth talk with the guest DJ. During the practice you can have a bash at mixing and selecting on vinyl’s, CDJs and controllers. Experienced artists are on hand to show you the ropes and offer nuggets of wisdom to iron out the wrinkles in your mixing.

Hollies ultimate goal is to get more female DJs on line ups around Birmingham.

“There’s so much talent around, and people are eager to get involved, you can see by the turn out”.

Holly believes that making equipment more accessible is imperative in inspiring the next generation of DJs. She tells us that she had the upper hand of knowing people in the industry already, but all to easily recognises that it isn’t the case for everyone.

“I wanted to provide this safe space for people to express themselves, to meet people and practice. I want people to be able to have a go and not feel like anyone’s watching; without the pressure.  Every day, I felt like it was always men in here [Café Artum] with their laptops, I’m not sure why that is but I was worried that girls felt intimidated so I wanted to change that”.

As for future development of the workshop, Holly hopes to see a repeat of the open DJ slots that proved to be huge success on International women’s day, get more international Womxn DJs involved in the project and continue yielding inspiration to the wider female population. 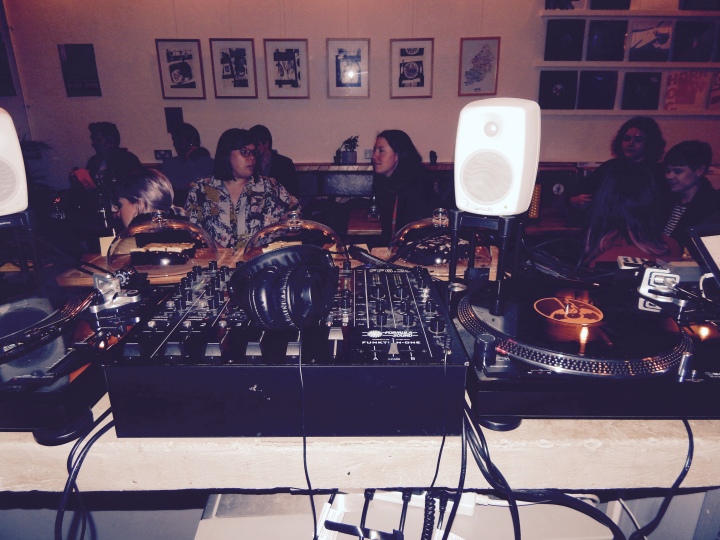 Erica is a Presenter and DJ who has harvested a pretty impressive inventory of experience. You may have heard her on BBC 1 extra, and more recently presenting WW Daily on World Wide FM with Silky voiced Jazz-master, Giles Peterson, but she’s most notorious for her project Elektrik Cave– a platform to discover and explore “the depths of new experimental music from around the globe”.

Erica’s introduction into the industry was through The Roundhouse in London. Here, she would attend each week and a pay the princely sum of two whole English pounds, enabling her to access and practice on equipment, and find spaces to create and explore her passions for diversity in music.

Touching on geographical favouritism, she’s mindful of the pedestal living in a place like London puts you on- lots of projects with pockets of cash to divvy out to potential artists. Unfortunately, these resources are a bit thin on the ground in Brum, which is why we rely on people like Holly and her vision, a motion Erika seconds:

“Selextorhood is awesome, it’s so important to give people the opportunity to access equipment and space, and bring people together”.

As well as demonstrating her DJ skills, Erica imparted some presenting wisdom to the Selextors with during this month in-between set talks. She also weighed in with some political views, expressing some concerns with regards to Brexit and its impact on the music industry. From subjects such as accessibility of international artists, to rising costs in the wax used to treat vinyl, she is very outspoken and insightful in her outlook of the future of radio, presenting and Djing post Brexit.

Be sure to check out Erica on World Wide FM to hear some of her delightfully askew music recommendations and political musings here or check out her mixcloud.

Zoe Phipps is one of Birmingham’s fledging Techno DJs. Having cut her teeth as a dancer in Ibiza in her late teens, Zoe is now turning her attention to the world of Djing.

You may have heard her dulcet tones on your morning commute in recent months- she guest presented the capital FM breakfast show late 2018. Mentored by the first lady of Birmingham drive-time Radio Sacha Brooks, and taking some useful DJ tips from Mark Spence (DJ Gym), this month Zoe leant her presenting skills and equipment to Selextorhood with her presenting station. The station gave the people the opportunity to practice their presenting skills and record interviews (queue a multitude of awkward faces- ‘oh my God, is that what I sound like?) using a podcast microphone, and get to get to grips with the accompanying software and of course, embellish others with her eternal words of Wisdom:

And last but by no means least-the most important of them all- the Selextor!

Black Country based DJ Laura attended Selextorhood this month in the hope of meeting likeminded selectors and brainstorming new nights and ideas.

Having already built up a respectable foundation as a DJ and playing at the one and only Digbeth Dining, Laura spoke about her experience as a female DJ and difficulties she experienced trying to break out into a largely male dominated area:

“I feel like as a woman sometimes you feel that there is this sense of ‘having to work harder’, purely based on your gender. Like, you have to prove yourself. But it shouldn’t be that way.  I know some male DJs who are truly awful, sound like the never practice or don’t even try and they continuously get booked. So, it’s great to have somewhere to network and practice, collaborate and meet like-minded people. A safe space, if you will.”

The general consensus here seems to be that the playing field is dire need of levelling, but there’s also a bucket load of recurring themes: access to equipment, gender inequality (you’re good-for a girl…) financial implications and spaces to practice to name but a few.

Erica Mckoy and a selextor

Access to DJing itself is bound in social constructs and for those who may not have the contacts or industry awareness, Selextorhood is the much-needed outlet for those aspiring mixers.

The next Selextorhood event will be at Café Artum on Wednesday 24th April, watch the Selextorhoood Facebook page for future announcements here.

Eat, drink and listen to banging tunes (and bring your Mom!).